On 29 April 2021, the French Embassy in Uganda and Stanbic Business Incubator Limited (SBIL) signed a funding agreement which officially marks the launch of a 2-year project in favour of entrepreneurship in agro-ecology and eco-tourism for a total amount of about 350,000 euros (approx. 1,509,000,000 UGX). This project will aim to support the sustainable development of Ugandan Micro, Small and Medium Entreprises (MSMEs) in these sectors, particularly those run by youth and women, by promoting skills development and networking.

"We are convinced that our added value as a country to support these young game changers is to foster opportunities for networking with international players and skills transfer, especially in sectors where France embodies a certain kind of excellence" said the French Ambassador to Uganda, H.E. Jules-Armand ANIAMBOSSOU, during the signing ceremony of the partnership agreement held at the incubator’s premises. 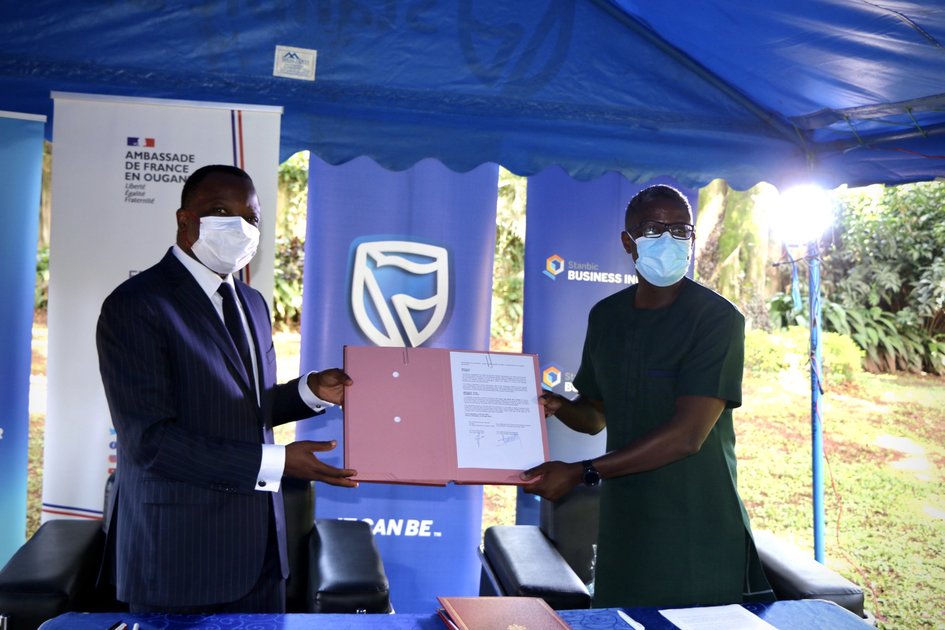 Building and supporting a network of African entrepreneurs, an ambition supported by France in favour of job creation on the continent

Through the Solidarity Fund for Innovative Projects (FSPI) mechanism of the Ministry of Europe and Foreign Affairs, the project financed by the French Embassy in Uganda is part of a broader ambitious target to create and support a network of African entrepreneurs throughout the continent. This project will thus aim to create opportunities for young people and women based on the sharing of expertise and networking in areas where French excellence is recognised.

In Uganda, two key sectors for job creation have been identified in partnership with SBIL: agriculture and tourism, which represented respectively 26% and 8% of Uganda’s GDP in 2019. In these two sectors, the French Embassy and SBIL will work on training and networking of MSMEs to gain visibility and develop on local, regional and European markets.

This networking also includes connecting the selected MSMEs with French initiatives in favour of entrepreneurship in Africa such as Choose Africa and the Kampala Business Club, as well as the network recently formed with the other REA FSPi projects that were selected this year. The summit on the financing of African economies on 18 May 2021 and the New Africa-France summit in 8-9-10 July 2021, orchestrated by the French President, Emmanuel Macron, will also represent opportunities to highlight these key economic actors that will shape tomorrow’s world. 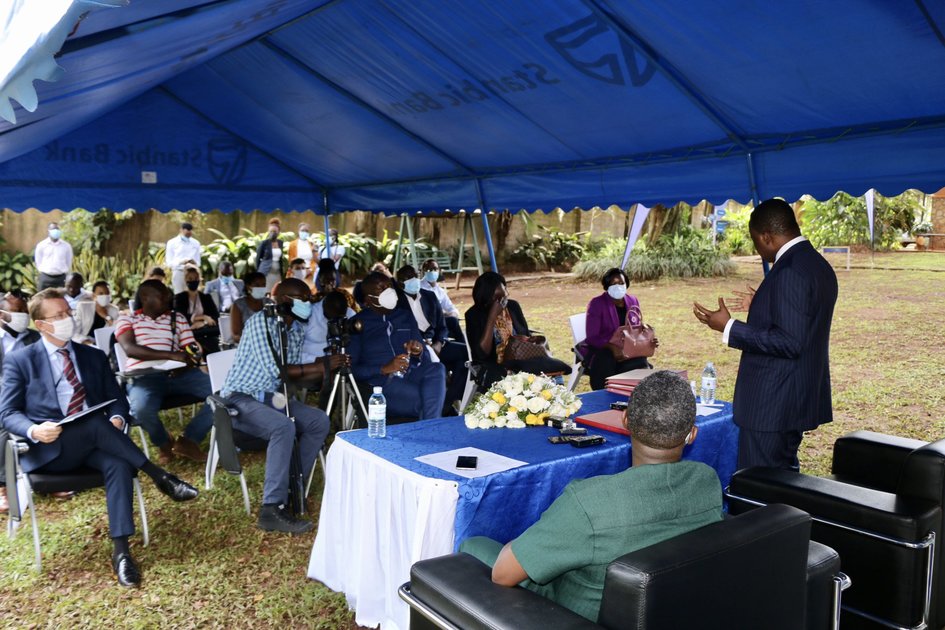 In a country that is the 14th most vulnerable in the world to climate change, the French Embassy in Uganda is focusing on agro-ecology and eco-tourism to promote environmental conservation as a vector for economic development.

Agro-ecology is a set of agricultural practices that build on the potential of ecosystems to create environmentally friendly production systems. Eco-tourism encompasses travelling to natural sites with the aim to learn, study or participate in activities that do not negatively affect the environment, while protecting local communities socially and economically.

In the context of the climate change crisis, this project seeks to address the strong and rising international awareness of the effects of climate change. These two sectors therefore provide avenues for moving towards a social and environmental transition driven by local communities. 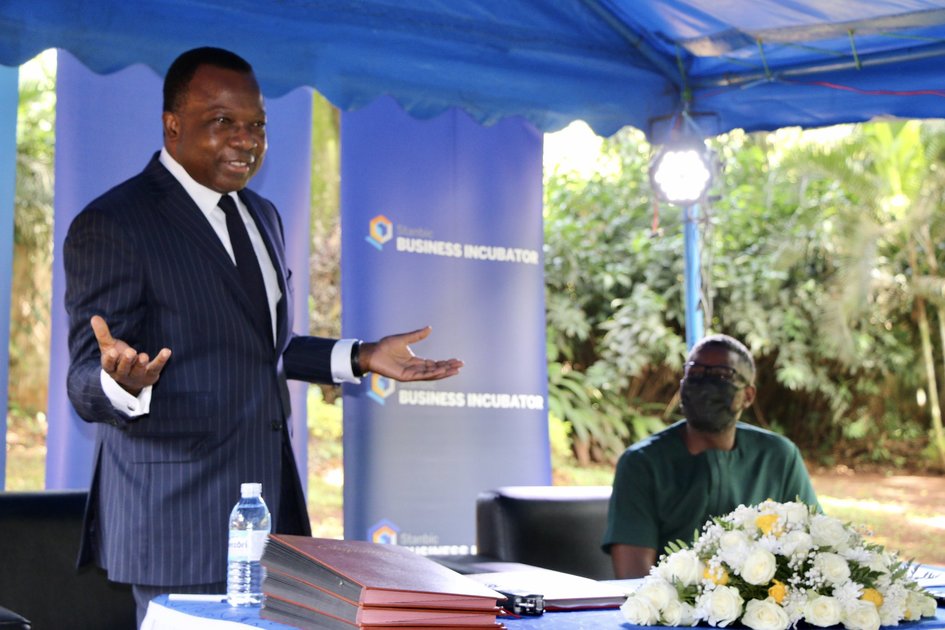 A strong requirement for inclusion, to work on the whole territory and to highlight the potential of women and young people

The French Embassy considers the demographic explosion that Uganda is currently experiencing, with 80% of the population considered to be young (under 30), as an opportunity for the economic development of the country. Small, medium and large enterprises account for almost 90% of the private sector, contributing to almost 75% of GDP, employing almost 2.5 million people, mainly young people.

"The creative potential of young Ugandans is limitless, provided that the right training and support mechanisms are put in place, such as those developed in this project," said the French Ambassador to Uganda at the signing ceremony of the financing protocol with SBIL on 29 April 2021.

The choice of the agro-ecology and eco-tourism sectors also responds to a requirement for inclusion and work throughout the territory, in order to continue supporting the most isolated regions in their economic development. Satisfied with the results obtained in the framework of the previous project financed by the Solidarity Fund for Innovative Projects (2019-2021), H.E. Jules-Armand ANIAMBOSSOU, wishes to continue France’s action in the North of the country in favour of job creation.

Gender equality being one of France’s priorities, highlighted through its feminist diplomacy, this project will support a minimum of 50% of MSMEs run by women, while the national average currently stands at 35%. The Embassy and its partner SBIL are also committed to facilitating access to training for parents, by adapting session times and offering childcare services for example. 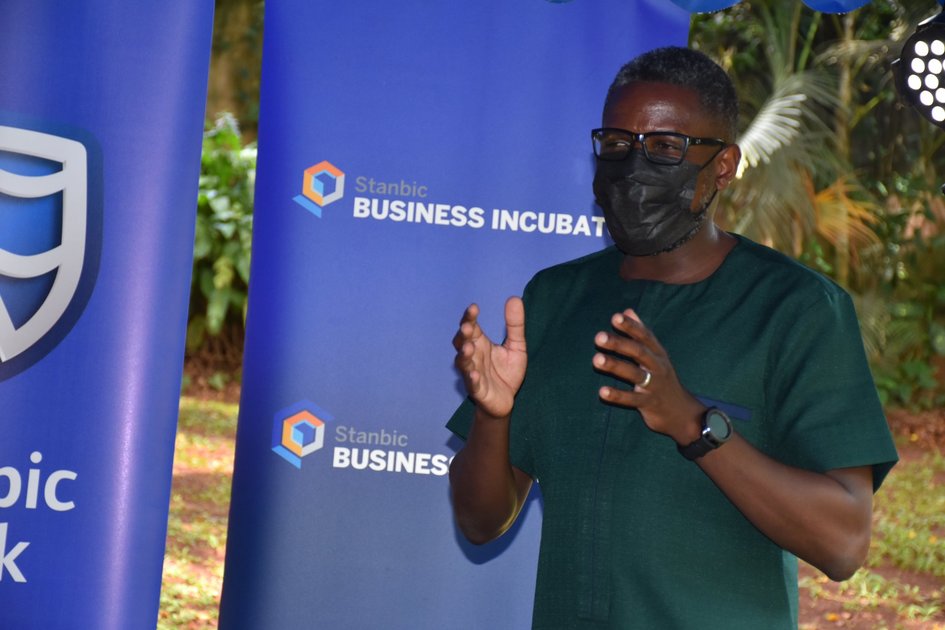